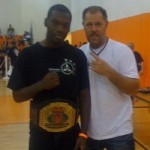 Dwight  Grant won the USA WKA MMA 185 pound division – he is going to compete for the World MMA title in Scotland at the end of the year!

Jaque won his fight by first round TKO.
Ajay Lost by a very close split decision.
Nate dominated the 1st round, but lost in the second round by submission (he was not supposed to fight MMA, but had to due to last minute changes in BBJ).
Ragellio fought his first MMA match, dominating the first rounds, but lost in the last.

Sifu said that all the guys  looked great! They each fought hard and represented AMAA with skill! We look forward to watching their dedication and hard work turn to further success in the future!