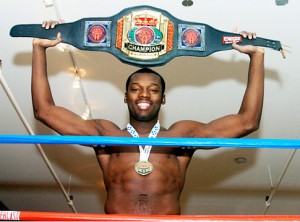 Dwight Grant wins the WKA World MMA Heavyweight title in Scotland! He traveled with coach and senior AMAA instructor, Phil Cruz, to Scotland to fight for a world title.

Dwight Grant wins ALL of his MMA bouts in Scotland to come home with a World WKA MMA title. Dwight won every single fight by way of first and second round TKO. Upon his return the NY Daily News (photo above courtesy of NY Daily News) did a follow up story of all of his triumph and success.

Dwight started his career in martial arts with Sifu Dan Anderson at AMAA, and now only five years later he is a world champion and teaching at AMAA, living out and working on his dreams.

If you work hard anything is possible! ANYTHING!