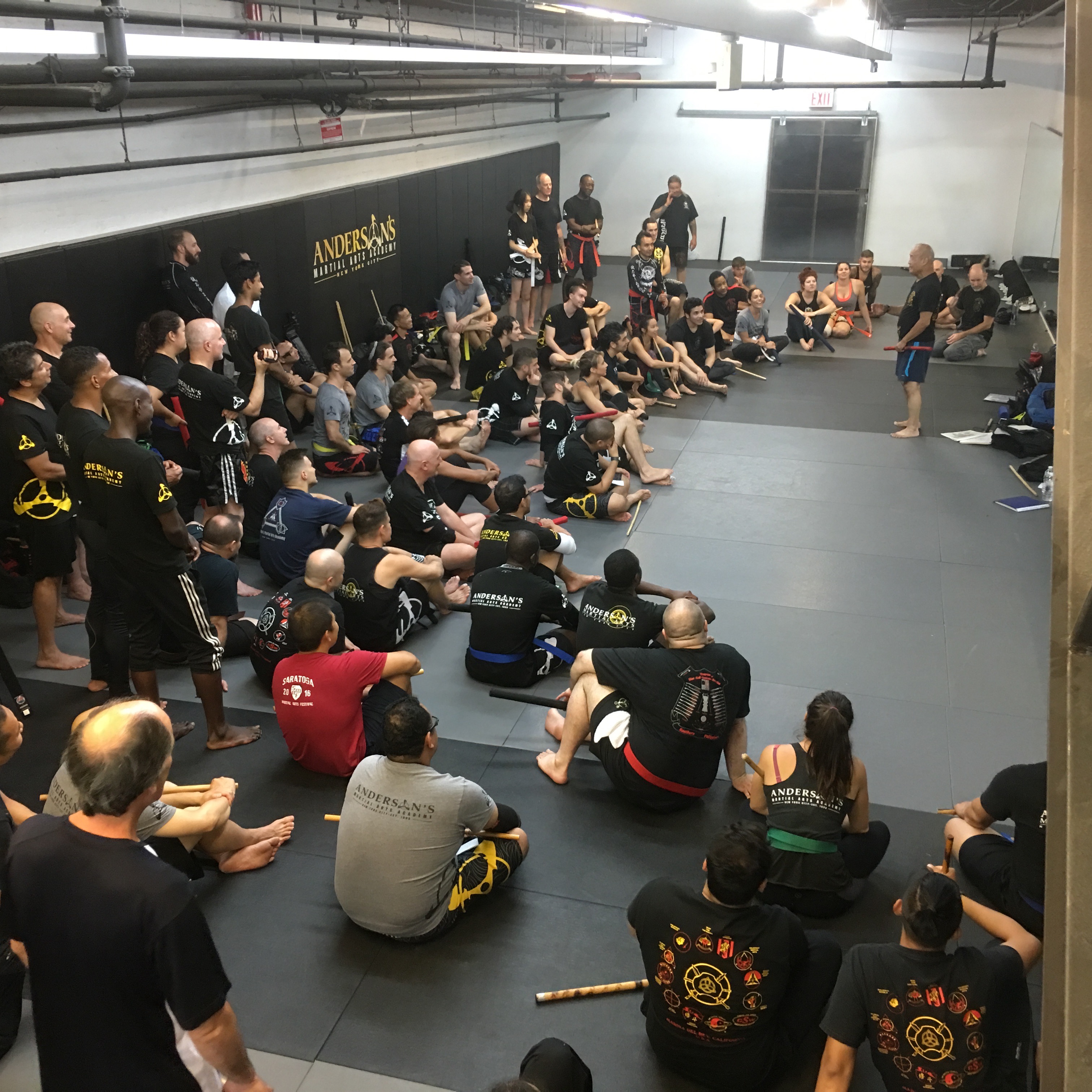 Training with the Legend for his fifteenth year at Andersons Martial Arts Academy!

While most of our students eagerly come in order to learn at Anderson’s Martial Arts for both our unique lineage and our incredible track record of producing real, credible and skilled martial artists another reason people flock to AMAA is to get the opportunity to learn from one of the world’s leading authorities; Guro Dan Inosanto.

Guro Dan comes to AMAA every single year. And this year it was even more special because Guro Dan turned 80 years old!

Known for it’s diverse curriculum, including; Filipino Kali-Escrima-Arnis, Muay Thai-Kickboxing, Shooto, Brazilian Jujitsu, Silat, Savate and Boxing, among many other exotic yet highly lethal and effective fighting systems, the Inosanto Academy is also the outgrowth of the “Jun Fan Gung Fu Institute” which was founded in the Chinatown District of Los Angeles, California on February 1967 by the late Bruce Lee. Today Andersons Martial Arts Academy has the great privilege to carry on these arts, and represent Guro Dan and Jeet Kune Do in New York City. 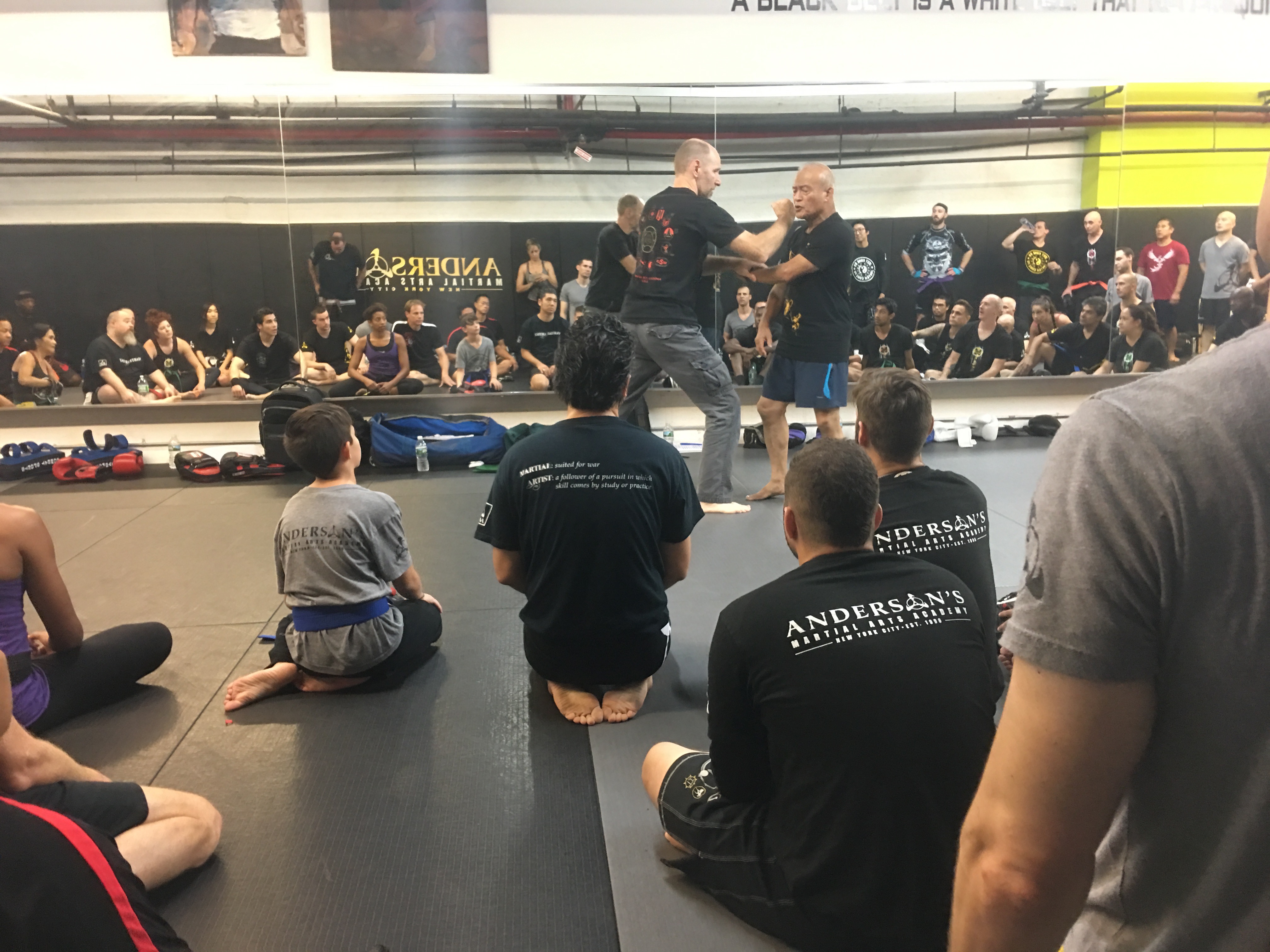 In 1970, Bruce Lee advised Dan Inosanto to “officially” close the doors of the J.F.G.F. Institute, and continue teaching the students in his “backyard gym” in Carson, California. It is said that Bruce Lee was becoming concerned that his growing popularity.

In 1973, at the time of Bruce’s death, Guro Dan Inosanto became the official heir and head of the arts and systems developed and taught by the late Bruce Lee. It is in the years to come that Guro Dan Instant began to educate the public and create a legacy of Jeet Kune Do by certifying incredibly capable and knowledgeable instructors all over the world.

To this day the Inosanto Academy and Guro Dan Inosanto continues to research and promote arts from different countries and cultures. He travels and does seminars in only a select list of Academies, only Academies run by his certified instructors.

It is truly a privilege to take part in many of these valuable training sessions, and an honor to have some direct interaction with Guro Dan Inosanto himself! We at AMAA have been honored to host Guro Dan Inosanto for the past decade and a half. Euro Comes to the Academy every single August.

This year Guro turned 80, so the seminar at AMAA was very special. begin’s these sessions with a morning of Kali, Eskrima-Arnis drills. The repeated sound of wooden training sticks connecting together rang out across the expansive floor of the academy, while the first two-hour session commenced. Then Guro soon had everyone add some knife to our stick-fighting combinations.

We were all inspired, but not  amazed (because that is Guro) by the way Guro Dan Inosanto, now in his early 80’s, was able to move so deftly through these drills with his assistant Joel and with Sifu Anderson while still able to keep eye contact and speak and interact with all of our of students…his flow of physical movements are seamless and effective and simply incredible.

Want to find out more about all of our training? our Jeet Kune Do program? how about our Muay Thai? Kali? Silat? Boxing? Brazilian JiuJitsu?

SIGN UP FOR YOUR FREE 3-DAY TRIAL TODAY!
ALL LEVELS AND COMPLETE BEGINNERS ARE WELCOME! 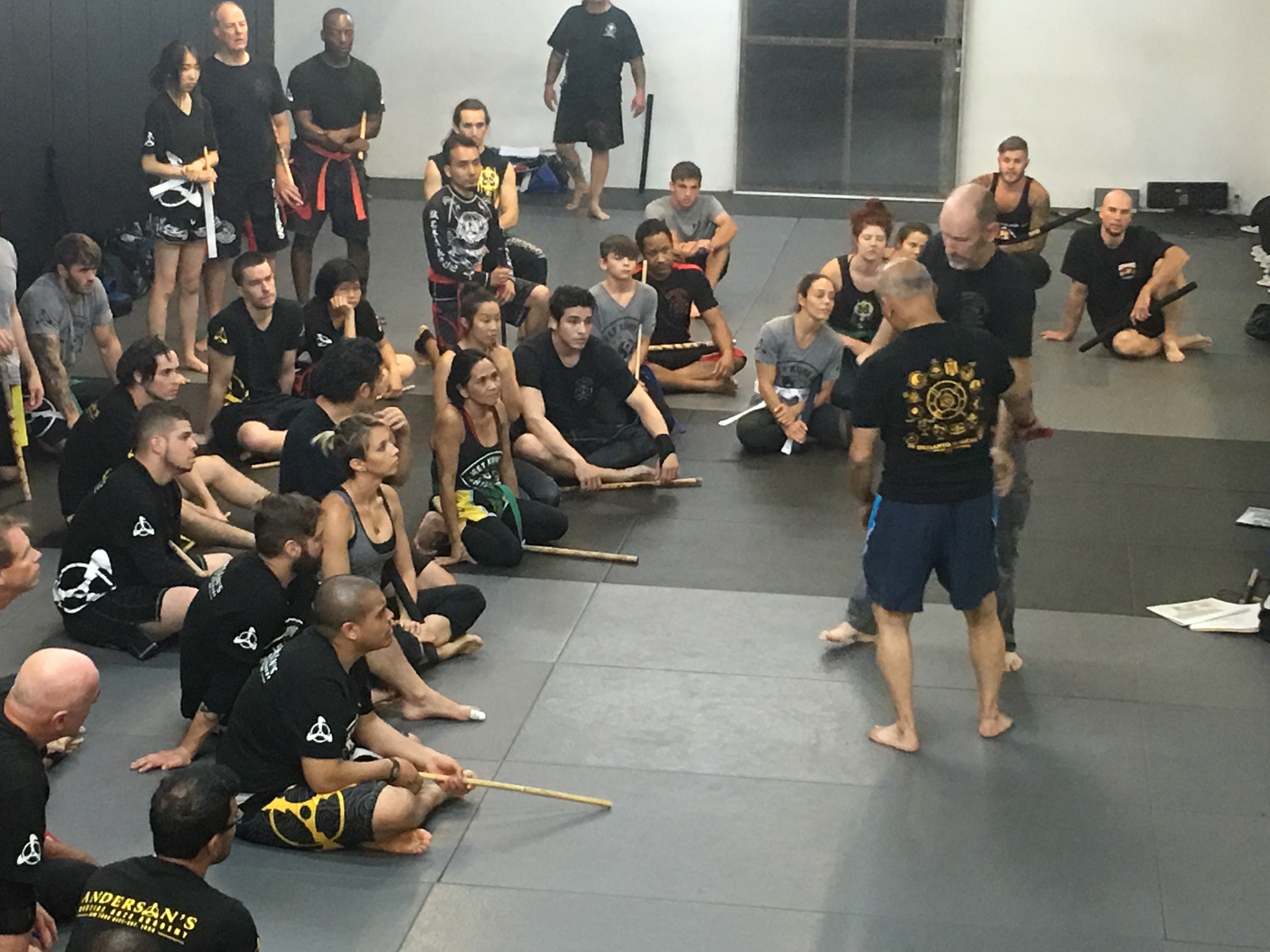 Guro Dan took taught two incredible days at AMAA, and answered many questions. He even invited my small group of AMAM students aside for several minutes to show us some of Bruce Lee’s original hand-written training notes and photos!

As always we were in complete awe. Training with a real legend like Guro Dan Inosanto is always and forever an honor non of us will never forget.

Every year, I will look forward to participating in the next AMAA Guro Dan Seminar program at the Inosanto Academy of Martial Arts!

Want to learn Jeet Kune Do Under Guro Dan Inosanto’s Direct Lineage? Andersons Martial Arts in NYC (thats us) is one of the only Academies in New York to be able to offer this type of program.