Did you know that Anderson’s Martial Arts Academy was one of the first martial arts schools to teach the art of Muay Thai in New York City?

Developed in Thailand, the art of Muay Thai is simple and brutally effective in sport, combat and self defense. Muay Thai is one of the world’s most effective striking based arts. After training in our classes, you will grow in your self-defense skills and competition ability due to the mixture of the brutal standing clinch, devastatingly effective kicks and knees, and amazing physical condition.

Here at Andersons Martial Arts Academy we have been teaching Muay Thai for over 20 years, and we are proud to say that our classes are host to a great variety of people, ranging in their skills and goals. We’ve produced world, national and state champions that always train alongside regular and highly motivated students.

While we have developed countless Muay Thai champions, our greatest pride and focus stays with giving this amazing art to the community; men and women of all ages, fitness levels and goals.

At the Academy, the core classes are taught under the guidance and instruction of Sifu Dan Anderson, who has been training, teaching, and creating champions in Muay Thai for almost two decades.

Our other Muay Thai classes are taught by highly experienced practitioners who are active champions, professional fighters and most importantly very skilled instructors, who still train daily under Sifu Anderson’s mentorship.

AMAA is also proud to be host to a great variety of workshops, classes and seminars with a variety of high quality contributing instructors, champions and masters and legends of the sport that help enhance the AMAA Muay Thai curriculum.

TRAINING MUAY THAI AT AMAA WILL INCLUDE THE FOLLOWING ELEMENTS:

Beginners, don’t worry! We will guide you through every step!

WHAT MAKES MUAY THAI SUCH AN EFFECTIVE ART?

Muay Thai, known as the “science of eight limbs,” includes punching, elbows, knees, kicks and at AMAA, we add in the ninth, the head. The art also teaches some of the most effective clinching techniques. It is the national sport and martial art of Thailand, and an effective art for superior physical fitness and devastating self-defense. Known for its practicality, power, and speed, it specializes in powerful kicks and strikes with the knees, elbows and standing grappling. Besides proving itself as the toughest ring sport, Thai boxing is an excellent addition to a self-defense curriculum.

WHAT CAN YOU EXPECT?

At AMAA, care is taken to teach students proper form and body mechanics to eliminate injuries while training and gain maximum effectiveness. The class places an emphasis building skill and technical understanding of the arts, as well as on the physical conditioning and cardiovascular benefits of Thai Boxing, but also adds in the needed mobility work that is essential for martial art longevity.

Muay Thai is one of the world’s most effective striking based arts. We will teach you to use it effectively and competitively. After training in our Muay Thai classes, your self-defense skills will reach new heights, your body will rise to new physical levels you never thought were possible, as will your conditioning.

COMPETITION VS. SELF DEFENSE?

While most of our students never have a goal to compete, those that do will have a great home place for their professional and amateur fight goals. Anderson’s Martial Arts is proud to say that we have produced many world and state champions in Muay Thai (we proudly display over thirty belts on our wall, all of which have been earned by our fighters during their time with us at AMAA) – we even have a special competition team training for those whose goal it is to fight in the ring. If you want to learn real Muay Thai for self defense and fitness, our school delivers.

Please check our schedule below to find a Muay Thai class that fits your preference. We also teach Muay Thai in Jeet Kune Do (JKD) 1, 2 & 3 classes.

Beginners and those with experience are welcome to classes, as we have multiple instructors helping and guiding our students in class. 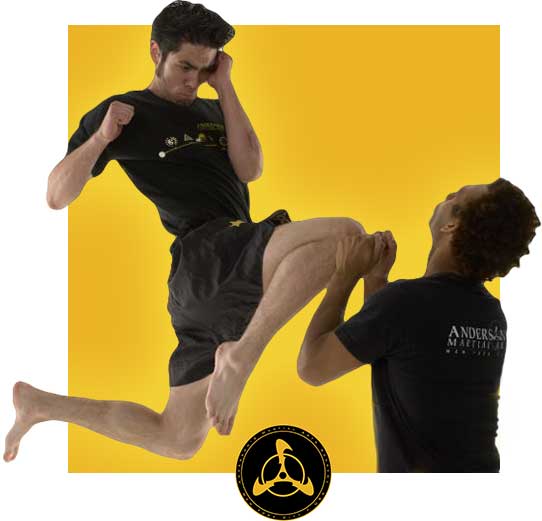 SET UP A FREE 3 DAY TRIAL