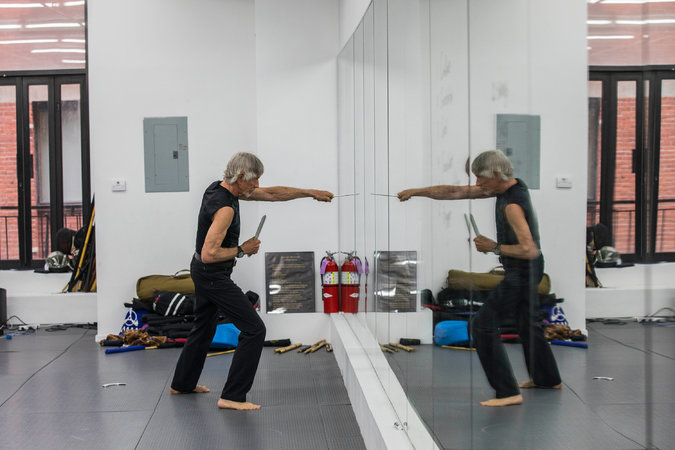 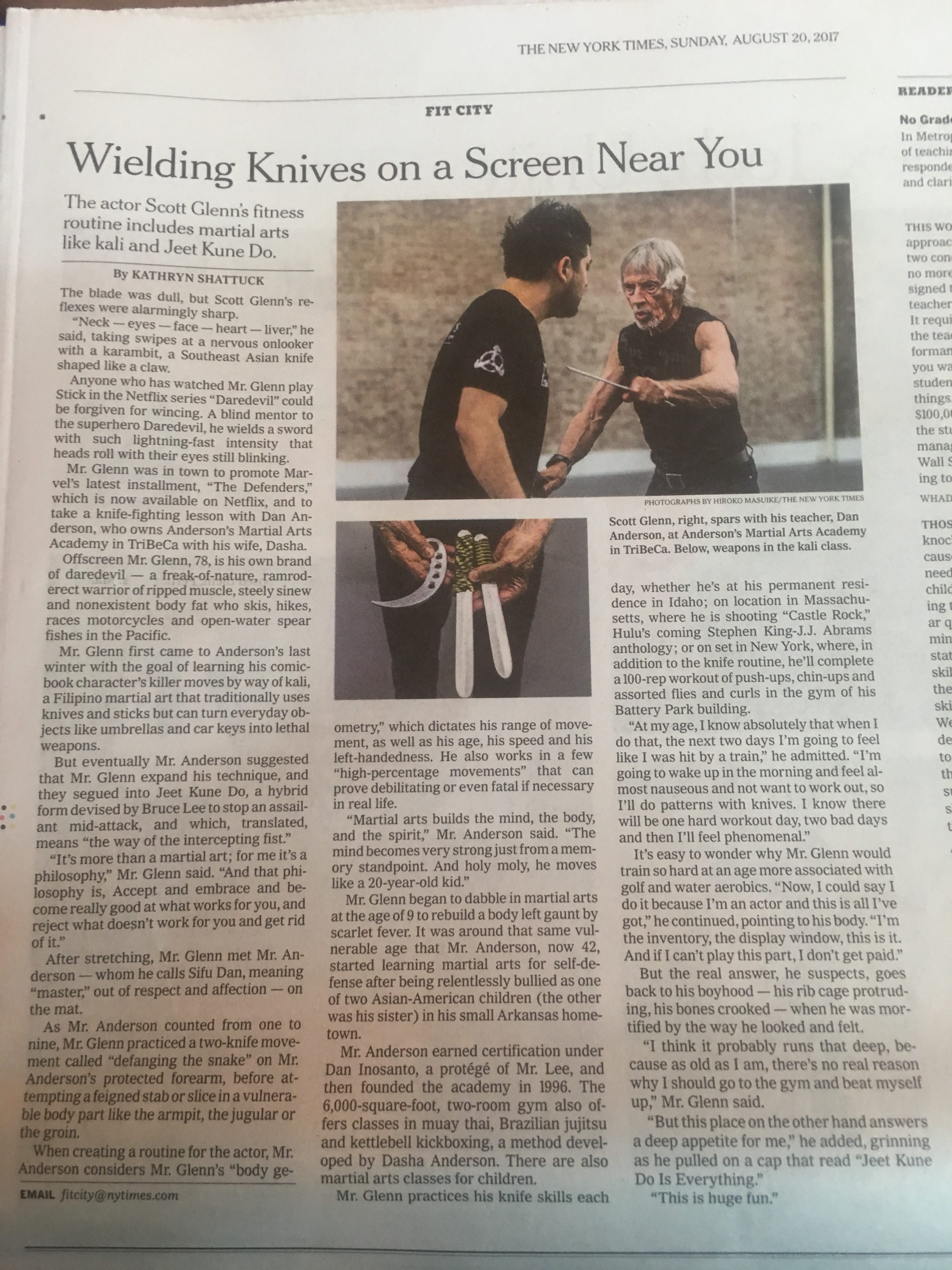 Did you happen to catch the latest Sunday Times?

Here is the article; written by By KATHRYN SHATTUCK
Photographed by, Credit Hiroko Masuike  From New York Times:

The blade was dull, but Scott Glenn’s reflexes were alarmingly sharp.

“Neck — eyes — face — heart — liver,” he said, taking swipes at a nervous onlooker with a karambit, a Southeast Asian knife shaped like a claw.

Anyone who has watched Mr. Glenn play Stick in the Netflix series “Daredevil” could be forgiven for wincing. A blind mentor to the superhero Daredevil, he wields a sword with such lightning-fast intensity that heads roll with their eyes still blinking.

Mr. Glenn was in town to promote Marvel’s latest installment, “The Defenders,” which will be available on Netflix starting Friday, Aug. 18, and to take a knife-fighting lesson with Dan Anderson, who owns Anderson’s Martial Arts Academy in TriBeCa with his wife, Dasha.

Offscreen Mr. Glenn, 78, is his own brand of daredevil — a freak-of-nature, ramrod-erect warrior of ripped muscle, steely sinew and nonexistent body fat who skis, hikes, races motorcycles and open-water spear fishes in the Pacific.

Mr. Glenn first came to Anderson’s last winter with the goal of learning his comic-book character’s killer moves by way of kali, a Filipino martial art that traditionally uses knives and sticks but can turn everyday objects like umbrellas and car keys into lethal weapons.

But eventually Mr. Anderson suggested that Mr. Glenn expand his technique, and they segued into Jeet Kune Do, a hybrid form devised by Bruce Lee to stop an assailant mid-attack, and which, translated, means “the way of the intercepting fist.”

“It’s more than a martial art; for me it’s a philosophy,” Mr. Glenn said. “And that philosophy is Accept and embrace and become really good at what works for you, and reject what doesn’t work for you and get rid of it.”

After stretching, Mr. Glenn met Mr. Anderson — whom he calls Sifu Dan, meaning “master,” out of respect and affection — on the mat.

As Mr. Anderson counted from one to nine, Mr. Glenn practiced a two-knife movement called “defanging the snake” on Mr. Anderson’s protected forearm, before attempting a feigned stab or slice in a vulnerable body part like the armpit, the jugular or the groin.

When creating a routine for the actor, Mr. Anderson considers Mr. Glenn’s “body geometry,” which dictates his range of movement, as well as his age, his speed and his left-handedness. He also works in a few “high-percentage movements” that can prove debilitating or even fatal if necessary in real life.

“Martial arts builds the mind, the body, and the spirit,” Mr. Anderson said. “The mind becomes very strong just from a memory standpoint. And holy moly, he moves like a 20-year-old kid.” 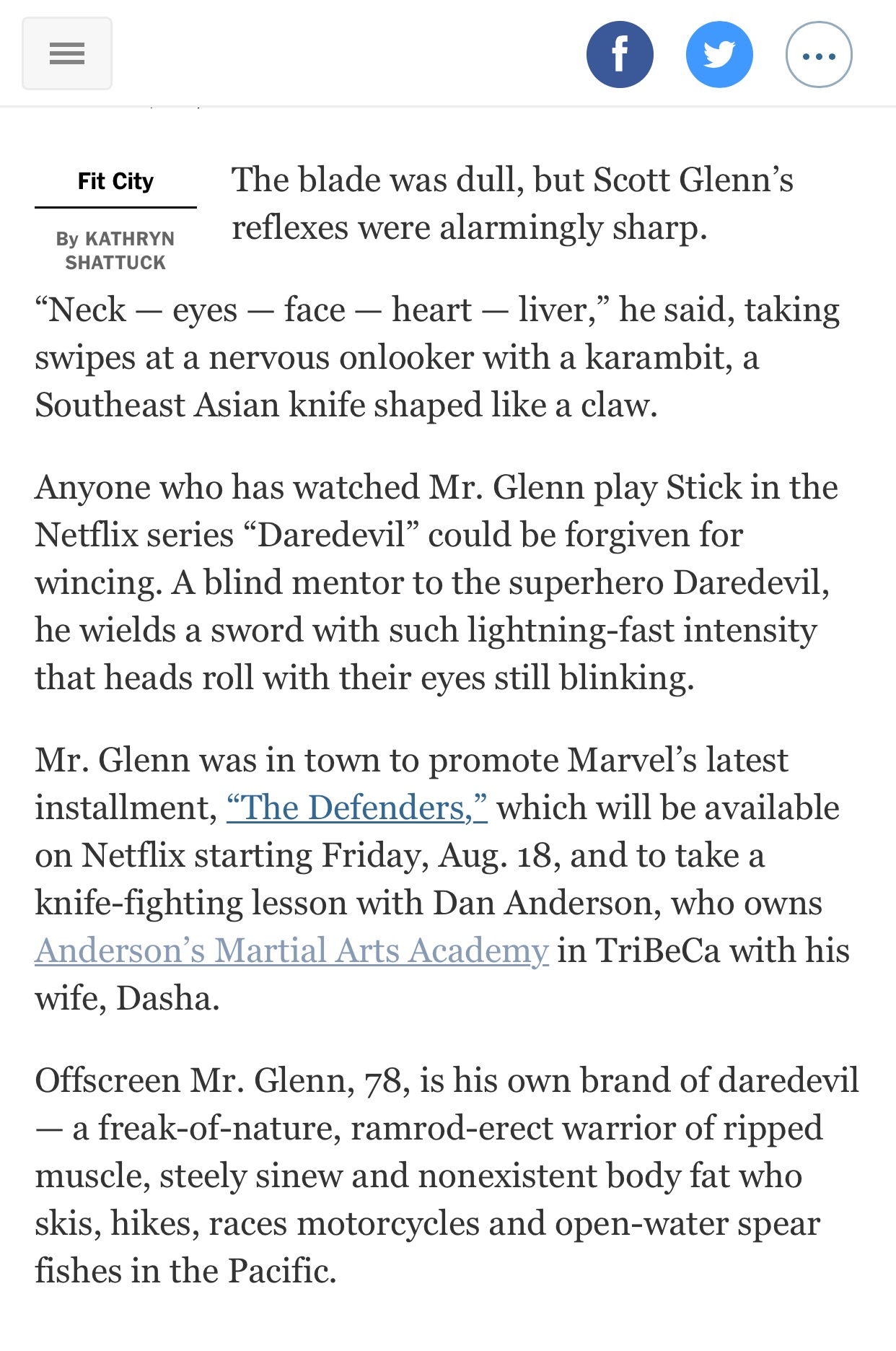 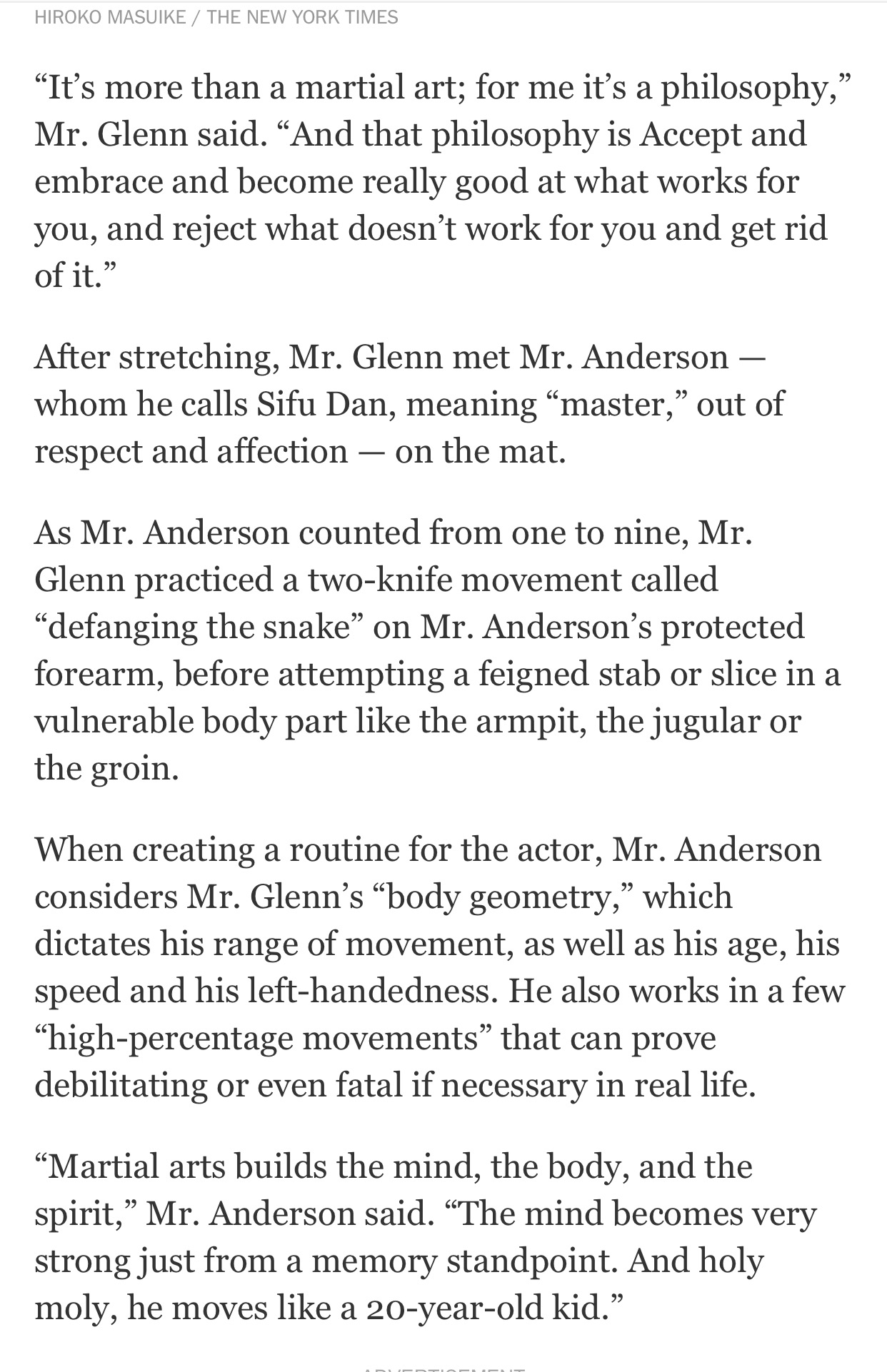 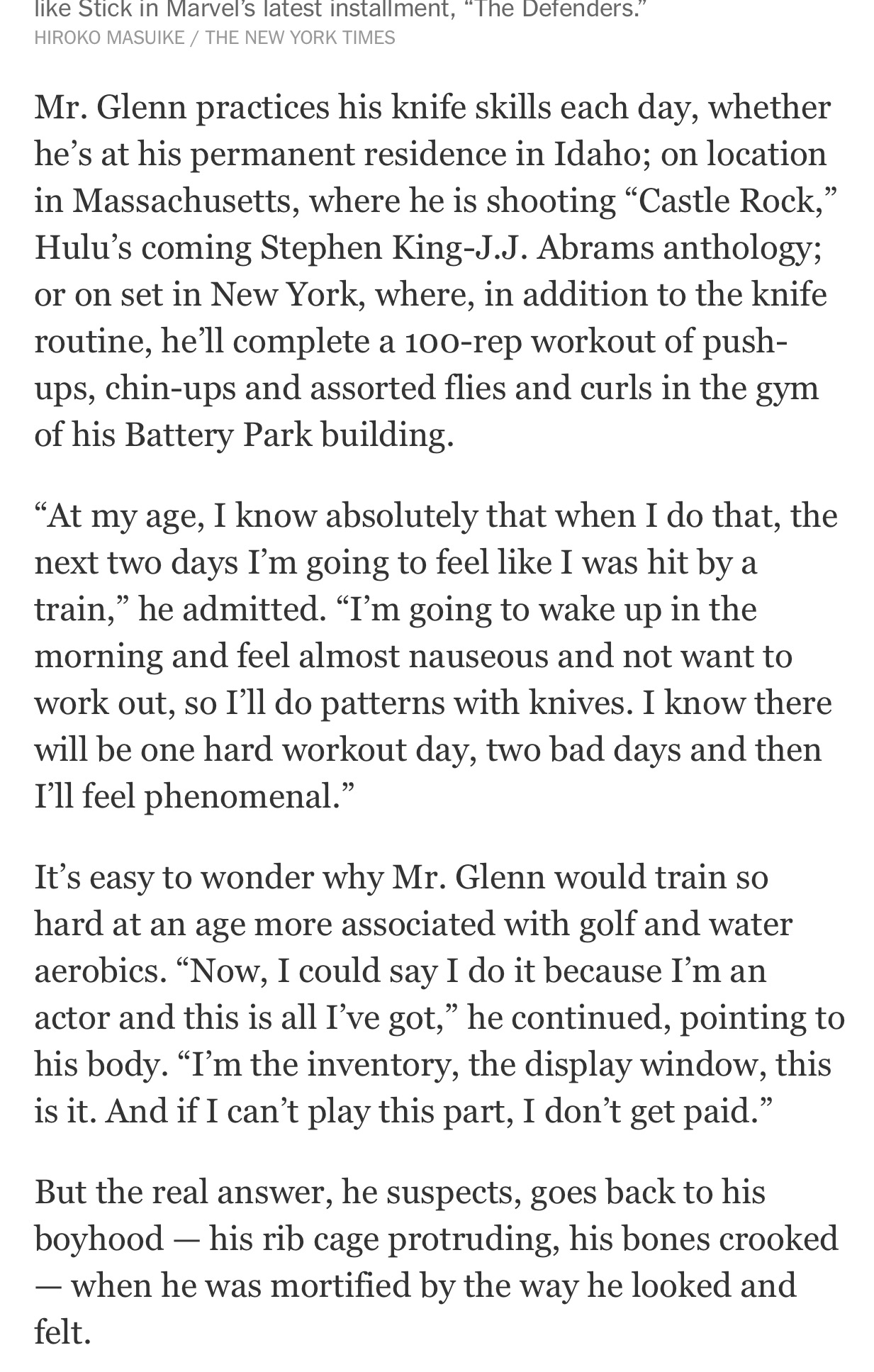 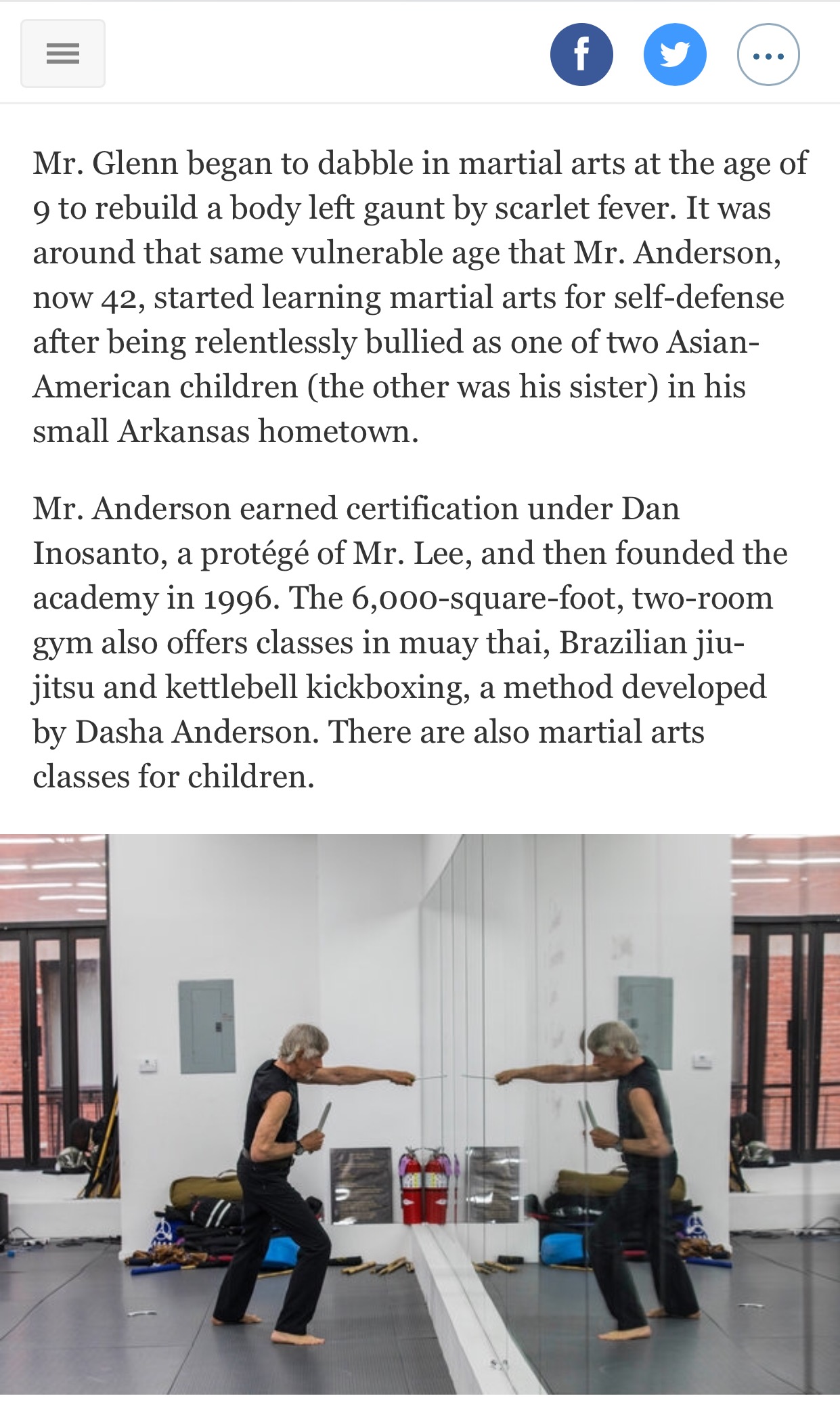 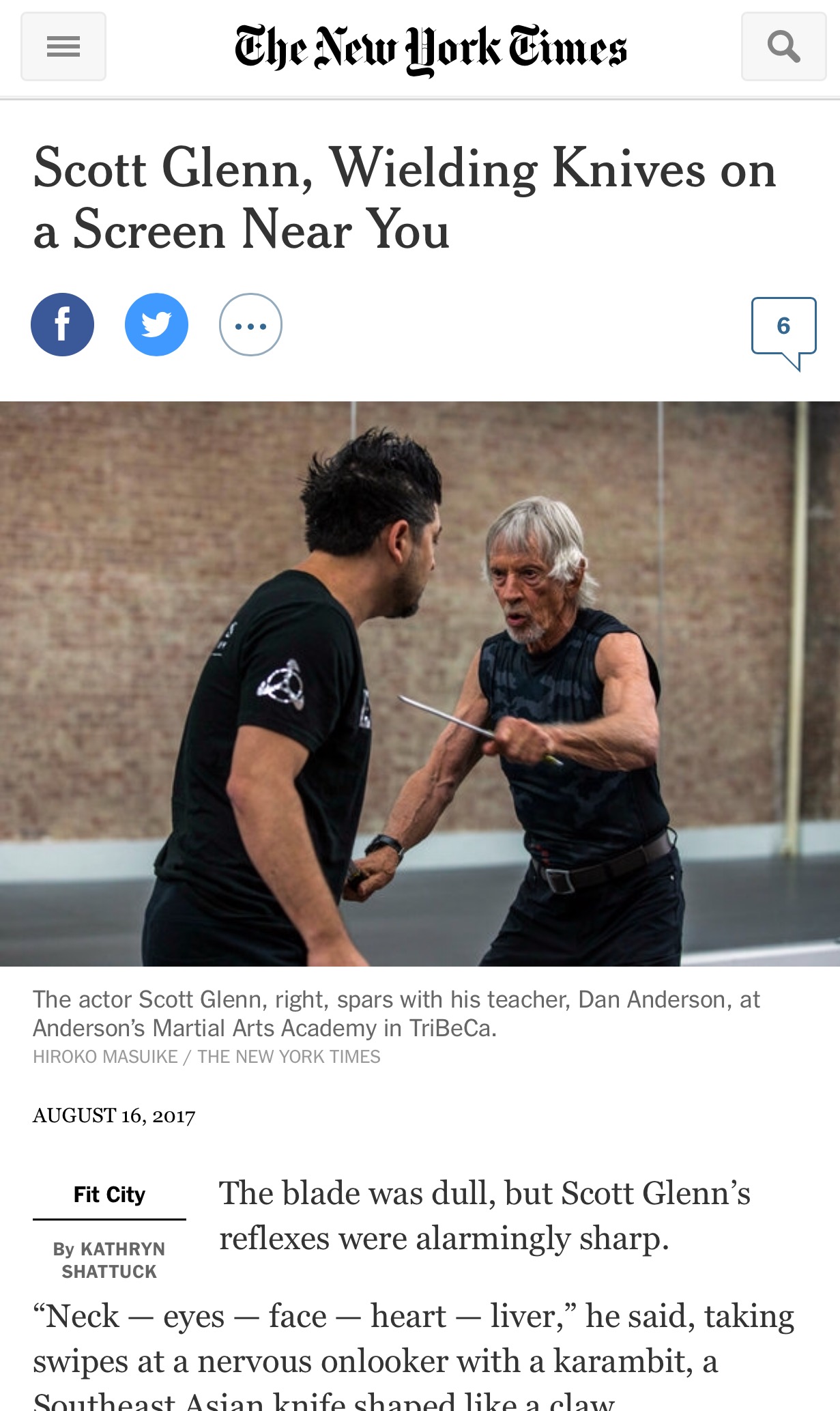